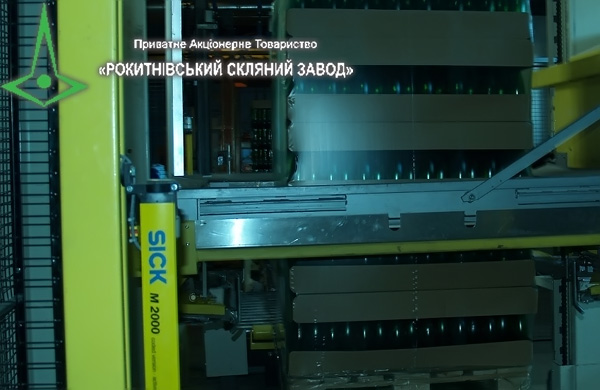 The history of our PJSC “Rokitnovskiy Glass Work” started in the last century. The first owner of the Factory is a Belgian capitalist Rosenberg, who in 1898 bought a plot with quick sands and built the glass factory planning to produce approximately 12 million half-liter bottles per year. At that time, it was a large enterprise that employed 270 workers. Glass Factory in Konstyantynivka town that produced annually 20 million bottles was the only factory that was larger than our factory.

During the times when this territory belonged to Poland, the factory had two glass melting furnaces, one of which produced window glass with the use of manual method, and the second one produced bottles of different capacity.

In 1939, after joining of the Western Ukraine to the Ukrainian SSR, the factory became the property of the state and until the beginning of the Second World War it produced bottles.

Then there was the war, occupation. The factory was ruined. After the liberation of Rokytne on January 6, 1944, glass makers and villagers started to rebuild the enterprise.

Since 1950, the factory almost every year increased its production capacity. Mechanization was implemented in production most rapidly in 1950-1967.

In 1975, the factory commissioned machine and bath shop No. 2 for the production of can glassware with the use of PVM- 12 and ZPVM-3 machines. In 1984-1986, technical upgrading of systems in shop No. 1 was conducted.

Since the early 90’s, Rokytne Glass Work developed especially dynamically: dramatic changes in the direction of increasing the capacity and improving the technological base of the enterprise took place, and in 1994, a complete restructuring of production was started at the enterprise.

In order to ensure the competitiveness of the products since April 2000, the factory started to use natural gas as technological fuel instead of fuel oil. It made it possible to significantly reduce production costs.

In 2004, a light glass blowing process called Light Production Blow-Blow (LPBB) was introduced and implemented at the enterprise. Thus, our enterprise was the first among the enterprises of the glass industry of the CIS and Eastern Europe who did it. The use of this technology made it possible to reduce the weight of bottles by 10 percent, to ensure even distribution of glass along the walls of the bottle during the process of its formation, which in turn, improved the hydrostatic pressure indicator of the bottle, which is 20 atmospheres.

A quality management system that meets the requirements of international standard ISO 9001: 2009 is implemented within the enterprise.

It shall be noted that during its existence, maintaining its traditional quality, the enterprise experienced both ups and downs. After the economic crisis of 2009, with an increase in energy prices, the factory suffered significant financial losses, lost its product markets.

Therefore, on the background of the above stated problems, a question of dramatic changes was raised. In early 2014, PrJSC Rokytne Glass Factory was acquired by Continuum Holding Company, which coordinates a number of business projects in Ukraine.

The new owners immediately outlined a range of basic tasks to be implemented by the management, namely: resumption of production at all facilities, job creation, establishing new markets for finished products both in Ukraine and abroad, and the most important one – implementation of investments for further modernization and introduction of new production technologies for 2014-2016.

Thus, within the shortest possible period of time, thanks to effective administrative management, proper technical and personnel policies, we managed to achieve stable work results of the enterprise, increase in sales of products; and search and attraction of new glass bottle buyers led to improved financial performance of RrJSC. All this suggests positive trends in the activity of the enterprise, and confirms strengthening of positions in the markets of glassware.

But the history of the enterprise is primarily made by its workers. The basis of every production is its people, their skills, professionalism, energy, they set the rhythm of the factory work.

Today PJSC “Rokitnovskiy Glass Work” is a company that meets the highest requirements of international standards of efficiency of production, of level of health and safety, training, product quality and social protection.  This is the business card of Rokytne region, its history, its pride. As the life of almost every family in Rokytne is inextricably linked with the enterprise, that with the hope and confidence looks to the future.